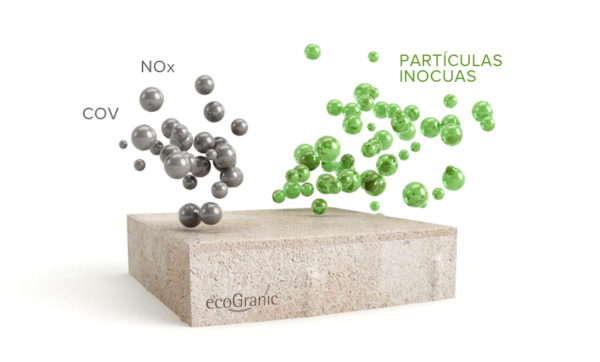 ecoGranic® is a technology developed and patented by PVT, implemented in a high resistance concrete prefabricated. In addition to compelling its architectonical and esthetical function, it actively contributes to the elimination of atmospheric pollutants.

This technology is very efficient in the elimination of nitrogen oxides (NOx), volatile organic compounds (VOCs) and particulate matter (PM). This prefabricated product is environmentally friendly. It is produced with recycled materials, among others, especially from construction and industrial sectors.

How does it work?

ecoGranic combats pollution through a process similar to the photosynthesis of the plants. It turns damaging gases into harmless compounds for human health and environment, through a natural oxidation process, chemical agents free and with an endless effect in time.

ecoGranic is made in two layers. Attending to the composition and thickness of the surface layer, it guarantees a high decontaminating efficiency during more than 25 years, in spite of the usual abrasion processes.

The ecoGranic® technology declares and guarantees the degradation of NOx with the endorsement of a Product Certificate, according to UNE 127197-1: 2013 standard.

How is the efficiency tested?

The different tests to which ecoGranic is subjected demonstrate high efficiency in the elimination of contaminating elements such as nitrogen oxides (NOx), volatile organic compounds (VOCs) and particulate matter (PM).

At lab scales, ecoGranic tests show a high efficiency in the elimination of NOx, VOCs and PM. In the case of nitrogeno oxides (NOx) the tests have been performed according to the European ISO 22197-1:2007 and Spanish 127197-1:2013 normatives, where ecoGranic has been classified as Class 3, the highest classification.

Regarding to volatile organic compounds (VOCs), the test have been run following the standards ISO 22197-2,3,4:2007 and AFNOR XP B44-013, obtaining a high elimination power for these pollutants.

However, it is in in-situ studies, carried out in finished works, where ecoGranic shows its real efficiency. Since the first study, realized in the year 2009, hundreds of measurements have confirmed a mean reduction about 60% in NOx levels. The repetition of this tests in the works after more than 5 years, have shown the maintenance of the decontaminating function.

If the surface of a football field was paved with this product, the pollution generated by more than 4.000 vehicles per year would be eliminated.

PVT manufactures ecoGranic® in multitude of sizes and formats of paving stones and slabs, garden pieces, curbs, steps, technical and accessibility solutions. And if you do not find what you’re looking for, we’re able to create it.

We offer a multitude of finishes for ecoGranic® products. Different textures and a wide range of colors combinable with each other. We are sure that we have the finish you are looking for for your project.

ecoGranic use has important benefits for health and the environment, and the consequent savings in public health.

ecoGranic® helps to obtain credits for the BREEAM and LEED Certificate of sustainable and efficient buildings.

ecoGranic® has a Solar Reflectance Index (IRS) of between 33 and 66 (depending on the color), thus avoiding the absorption of heat.

ecoDraining® from the ecoGranic® range is highly draining allowing the construction of rainwater collection systems for later consumption as non-potable water.

Materials of low environmental impact and of local origin:

ecoGranic® has a recycled content of up to 30%, thus reducing the impacts resulting from the extraction and processing of raw materials. All raw materials used for production, as well as manufacturing, are made in Spain.

All raw materials used for production have been extracted legally and conveniently, and have their corresponding certification.

The ecoGranic® products are Applus certified, which indicates the ability to reduce NOx levels in the atmosphere with class 3 (maximum classification in the standard).

ecoGranic® is a pioneer in the market since it includes catalysts and photocatalysts that are capable of degrading different atmospheric pollutants, both in indoor and outdoor environments.

The draining properties of ecoDraining® products allow the construction of rainwater collection and recirculation systems, which after being filtered, can be used in watering gardens.

All material is national.

Advantages of ecoGranic compared to other pavements

The use of ecoGranic offers a multitude of both technical and environmental advantages.

The ease of replacement and maintenance make ecoGranic a very suitable pavement for our cities, where most of the services always go along the sidewalks. In addition, it offers excellent architectural and aesthetic alternatives.

The dimensional uniformity and its greater range of sizes and thicknesses make ecoGranic an ideal flooring for all uses, whether pedestrian, mixed or road.

ecoGranic offers multiple solutions of colors and finishes with high anti-slip performance and very good resistance to adverse weather conditions. All this for lower costs of both acquisition and installation, and erosion of the planet.

ecoGranic technology is not based on additive cements, but is a patented formula that is incorporated into the top layer of tiles from 7 to 12 mm thick and guarantees maximum and permanent effectiveness. On the contrary, products made with additive cements cannot guarantee their decontaminating capacity since cement is a fundamental element of concrete, its dosage being defined and cannot be modified to achieve the desired decontaminating capacity. In addition, the prices of photocatalytic cements are very high, so their use would force prices out of the market or a reduction in the dosage and therefore in their effectiveness.

Advantages over spray or photocatalytic primers

ecoGranic is part of the piece. On the contrary, in sprays or primers, the decontaminating duration in time is very limited. Pavements are subjected to regular processes of erosion and abrasion due to pedestrian traffic, traffic, etc. Said wear eliminates in a short time any film with photocatalytic properties applied to the pavement.

If you still have doubts, consult our FAQs about ecoGranic

How long does its effect last?

Thanks to the thickness of its active layer, between 7 and 12 mm, ecoGranic guarantees its decontaminating activity for more than 25 years, despite the usual abrasion processes.

Are all colors equally effective?

All ecoGranic pieces offer decontaminating activity, although those manufactured in light tones are more effective.

Are there contraindications in the use of ecoGranic®?

No. The controls and tests to which they are subjected show that far from having any adverse effect, they offer even better mechanical performance than traditional pavements.

What means exist to verify its effectiveness?

At the laboratory level, there are the European ISO 22197-1:2007 and Spanish UNE 127197-1:2013 standards, which allow tests to measure the degradation of nitrogen oxides (NOx). At the same time, PVT offers the possibility of carrying out tests in situ after the execution of each work.

Is this product protected?

The manufacture of these decontaminating pavements is duly protected by the patent that enjoys a priority of December 10, 2008, and in force in Europe and the United States.

What is the cost of ecoGranic®?

ecoGranic has a variable price depending on the models, formats, thicknesses and finishes, which is in line with quality flooring.

You can find out more about which cookies we are using or switch them off in settings.

This website uses cookies so that we can provide you with the best user experience possible. Cookie information is stored in your browser and performs functions such as recognising you when you return to our website and helping our team to understand which sections of the website you find most interesting and useful.

Strictly Necessary Cookie should be enabled at all times so that we can save your preferences for cookie settings.

This website uses Google Analytics to collect anonymous information such as the number of visitors to the site, and the most popular pages.

Please enable Strictly Necessary Cookies first so that we can save your preferences!